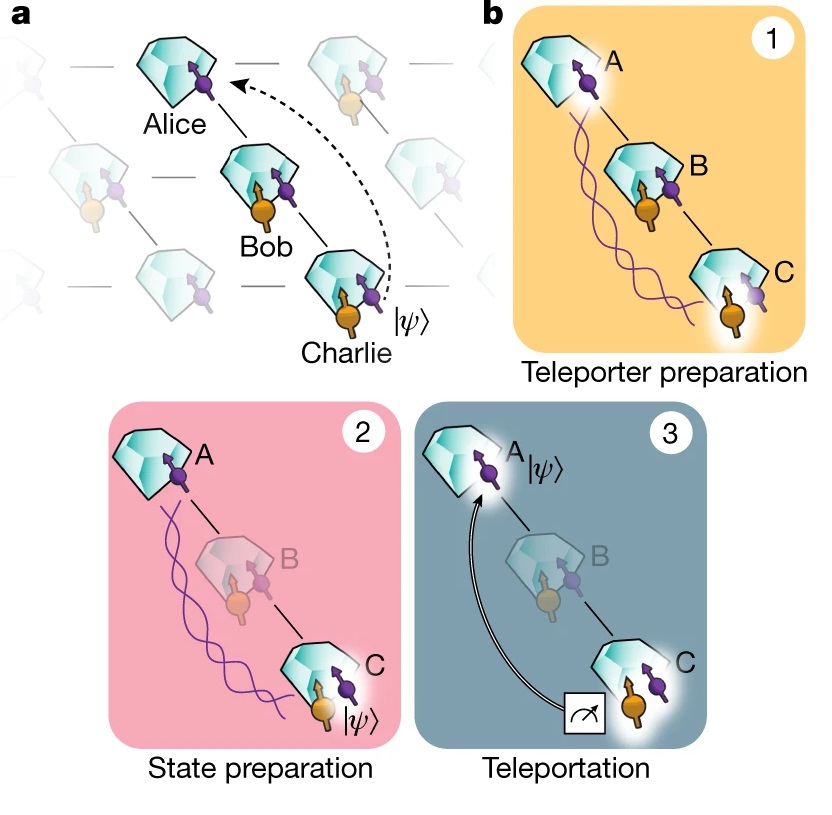 Delft (Netherlands) Scientists from the Kavli Institute of Nanoscience and Delft University of Technology were able to teleport quantum information over a small network with 3 nodes. For the first time, they have succeeded in quantum teleportation between distant, not directly connected nodes. This is an important step on the way to a future quantum internet, the research group reports in the journal “Nature” (https://doi.org/10.1038/s41586-022-04697-y) .

For future applications of a quantum internet, quantum information so-called quantum bits (qubits) must be exchanged over a network. For example, information could be transmitted tap-proof or several quantum computers could be connected to further increase their computing power.

But the transmission of quantum information between nodes is not trivial. In the laboratory it is relatively easy to send qubits using photons, but over long distances the information written in photons is most likely lost due to unavoidable losses in fiber optic cables. Teleportation offers a better way of transmitting quantum information. The core of this concept, best known from the science fiction series “Star Trek”, is entanglement. In this quantum physical phenomenon, dismissed by Albert Einstein as “spooky action at a distance”, 2 entangled particles remain magically connected to each other and share their physical properties. The measurement of one immediately determines the state of the other, even if they are arbitrarily far apart.

Teleportation thus enables the reliable transmission of quantum information between distant nodes. The fact that this works has often been successfully demonstrated in neighboring network nodes – physicists always call them “Alice” and “Bob”. With several nodes, however, the requirements increase enormously.

The researchers from QuTech – a cooperation between the Technical University of Delft and the Dutch research organization TNO – have now demonstrated teleportation between non-neighboring nodes, i.e. via a network, and transferred quantum bits from “Charlie” to “Alice” with the help of “Bob”.

For this they use stationary qubits, whereby the quantum information is written into tiny defects (nitrogen vacancy center; NV center) of a diamond. The teleportation itself then takes place in 3 steps: In order to prepare the “Teleporter”, “Alice” and “Charlie” must be entangled once. Because they don’t have a direct physical connection, “Bob” comes into play, which is connected to the other two nodes. Through a special sequence of entanglements and measurements between “Bob” and “Alice” and between “Bob” and “Charlie”, “Alice” and “Charlie” are entangled.

In the second step, the qubit is generated in “Charlie”, i.e. the “message” to be teleported. This can be something like “1” or “0” or various other intermediate values ​​of the quantum state of the NV center. In order to teleport this information from “Charlie” to “Alice”, “Charlie” performs a measurement of his quantum state. Because he is entangled with “Alice”, her quantum state is instantly established. With the measurement, the information appears immediately on “Alice’s” page.

In order not to destroy the sensitive quantum information during each of these steps, the researchers had to improve the preparation, manipulation and reading of the quantum states. However, universal teleportation in a quantum network is still a long way off, say researchers who are not involved in the work in an article accompanying the publication. Further improvements are needed to enable multiple rounds of teleportation and create large-scale quantum networks.

The researchers want to achieve this by reversing steps 1 and 2, first generating the quantum bit to be teleported and only then preparing the “teleporter”, i.e. interlocking “Alice” and “Charlie”. For this, the quantum information must be stored for a short time. If this succeeds, teleportation could then take place entirely on demand, which will probably be necessary in a future quantum internet.

2 thoughts on “First Quantum Teleportation Between Unconnected Nodes, an Important Step Towards a Functioning Quantum Internet”