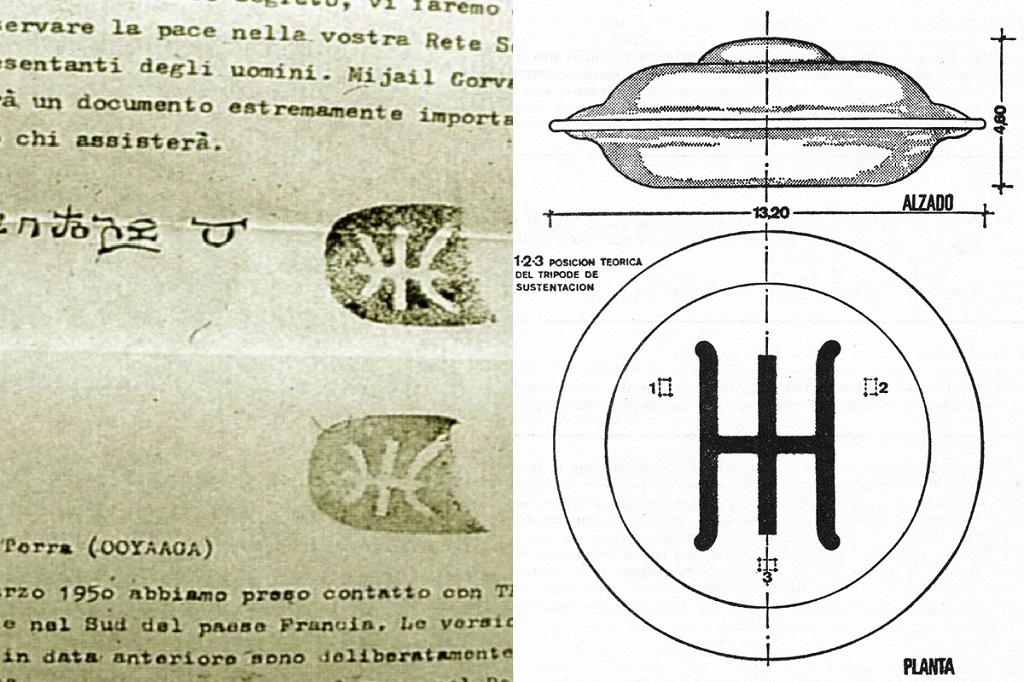 From the 1960s, scientists in France and Spain in particular received strange letters in the mail. The sender: Alleged aliens from the planet “UMMO”. In the letters they share details about their culture, society and science.

It all started with about 20 public figures receiving letters, all bearing the same emblem – )+(. Others receive mysterious calls at the same time, with synthetic voices explaining that they are from the planet UMMO, orbiting the sun IUMMA, 14.6 light-years from Earth, known to us as Wolf 424, answering precisely every question posed to them in the most diverse fields of knowledge, often for hours. One of the recipients of these mysterious letters, UFO researcher Prof. Fernando Sesma, collects them. He wrote a book about it called ‘UMMO : Another Inhabited Planet’.

Two years later, the letters, all of which can be identified by a fingerprint-like stamp with the UMMO symbol, come not only from Spain, but also from Paris, Buenos Aires, New York, Adelaide, East Berlin, West Berlin and London. The letters all look as if they came from the same sender, the address usually written in clumsy letters by hand or typed on. The letters themselves are typed, often with extremely intricate, clean technical and scientific graphics.

1950, March 28th. On this day, according to the letters, the first UMMO spaceship landed in the French foothills of the Alps. Signals sent out by a Norwegian ship in a geophysical experiment in 1934 were received by UMMO 14.6 years later and interpreted as radio signals of intelligent origin.

Now, this could all too easily be dismissed as a hoax. But the “contact of the postal kind” lasted more than 50 years. During this time, around 1,500 typewriter-typed pages came together, on which highly complex relationships that were even illuminating for scientists were described. The alleged extraterrestrials deliberately omitted any concrete information that could lead to their discovery or to the subsequent development of their technology by mankind. These letters form the basis of the so-called “UMMO affair”. The actual existence of these aliens has sofar been impossible to prove or disprove.

The Italian UFO researcher Paolo Guizzardi from the research association “Centro Ufologico Nazionale” has been investigating the legacy of the UMMO for years. He describes in detail how – according to the letters – contact with the UMMO came about, what their planet is like, how the extraterrestrials live together, how they think, feel, act and on what scientific basis they do it.

The UMMO claim to be the inhabitants of the planet Iumma, which is 14.6 light years from Earth. This is therefore not visible from Earth, since a cloud containing “absorbing matter” lies between Iumma and Earth.

Some UMMO supposedly live on Earth and send mail to chosen ones to benefit us on issues pertaining to physics, ethics and civilization. On the other hand, other sources claim that the UMMO want to enslave us and keep us under control by their presence. “)+(” is the sign of the language of the UMMO, which means nothing more than “Iumma”.

Since 1967, certain scientists, philosophers and various other people have been receiving letters apparently from different locations on all continents of the earth. The senders are allegedly members of the extraterrestrial race calling themselves UMMO. All are signed with this character: )+(

It is striking that these letters are anything but poor in information. Other such letters from free riders – standard UFO wisdom – are usually not to be taken seriously. However, these show new concepts, new perspectives and have convinced a lot of intelligent people:

Juan Dominguez (scientist, Spain), Jean-Pierre Petit (scientist, France), for example, received such UMMO letters. They viewed the revelations therein as a physics and cosmology more advanced than that known on Earth. The letters even contain complex mathematical formulas and diagrams explaining their concepts and technology. Dr. Petit even further developed some of the UMMO notions to fit his own parallel universe theories.

Teyssandier (physicist, France) analyzed all the UMMO communications available to him and found no scientific errors in them. Dr. Jacques Vallee, an otherwise skeptical scientist, also admitted the letters were on par with those of clever doctoral candidates.

A collection of all the letters in various languages can be found here: https://ummo-ciencias.org/cartas.html 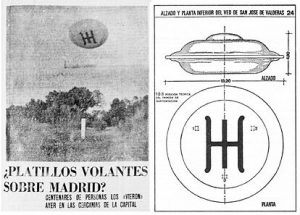 In Madrid (Spain) and Voronezh (Russia) there were frequent UFO sightings, where the UMMO symbol was discovered again and again. In 1966 and 1967 in Aluche, San Jose de Valderas and Santa Rosa (Madrid suburbs) and in 1989 in Voronezh, a series of strange events took place:

February 6, 1966: In Aluche, three independent witnesses see a whitish disc, one recognizes the UMMO symbol on the underside: )+(

June 1, 1967: A dozen witnesses see a disc 40 meters in diameter (San Jose). A few hours later, 10 witnesses see a similar disc, also with a )+( marker, which landed for a few minutes and then flew away again. At this site researchers found cylindrical containers covered with indecipherable characters (meaningless scrawl or possibly an extraterrestrial language). The )+( character was found on each.

October 1989: For several days, hundreds of Voronezh residents watched the landing of a spaceship or something similar in a city park.
Humanoid beings got out and walked around the city. The sign of UMMO )+( could be seen on the vehicle and their uniforms. 500 people saw an unidentified flying object hover over their residential area. 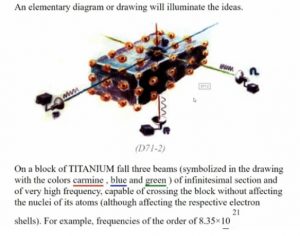 The letters describe very detailed various technological concepts that are far beyond our current understanding. Considering these text were already sent in the 60s and 70s were our computers operated with very limited storage capacities and tapes, they already described in depth their own storage mechanism which supposedly can store exabytes of data in titanium cubes.

The whole paper describing this futuristic memory storage system can be obtained in Spanish, French and English at https://ummo-ciencias.org/cartas.html the number of the letter is: D71

There is a youtube video looking at the specific letters and this concept in detail which can be found here:

In 1980 when Antonio Ribera was working on a documentary film about the UMMO affair, they contacted him and suggested the following closing words for his film –

“For 30 years we have been studying your sciences, your culture, your history and your civilizations. We brought all this information from your earth to the planet UMMO and stored it there in our titanium crystals. We have shown you our culture and technology in a purely descriptive form, so that you cannot convert to it or adopt it blindly. We have done this because we are saddened to learn that you use your science primarily for war and destruction. You are like children playing with terrible and dangerous toys that will destroy you. We can not do anything about it! A cosmic law says that each world must go its own way, whether it survives or perishes.

You chose the second option. You are destroying your planet, wiping out its species, and poisoning your atmosphere and seas until now, beyond repair. It is with sadness that we see your madness and understand that the enemy is ONLY within you. We cannot predict your future, for your psyches act completely unpredictably, in capers that border on paranoia. As your older brothers in the universe, we sincerely desire your salvation. Do not destroy your beautiful Blue Planet, a rare atmospheric world that glides through space so majestically, so full of life. It’s YOUR choice.”

The UMMO letters are still a mystery today. If it is all a hoax, someone is very persistent at keeping it up for decades and must have a lot of knowledge about astronomy, physics, mathematics and medicine in order to create such an elaborate fake.