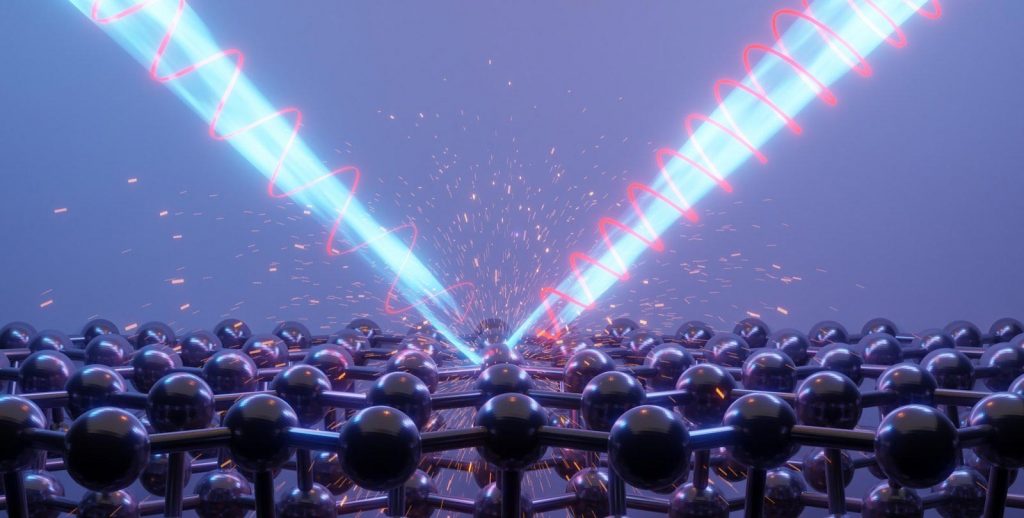 California (USA) A new breakthrough that uses a specialized material only three atoms thick enables scientists to control light more precisely than ever before.

The discovery has many applications for example in telecommunications and displays – a layer of black phosphorus that is only three atomic layers thick proves to be a fast and easily controllable manipulator of light. As an experiment from Caltech shows, the polarization of light through the semiconductor material can be electronically controlled. Because the material reacts millions of times faster than an LCD display and allows 20 times smaller pixels, this opens up new possibilities for screens, but also for optical telecommunications.

The direction of oscillation of the light (its polarization) is an essential property for many optical applications. It is the basis of quantum transmissions through entangled photons, but also of LCD displays, hologram videos, many optical sensors and classic data transmission through optical conductors. So far, the polarization of the photons used for this has mostly been generated statically by special filters or nanostructures.

The research was conducted in the lab of Harry Atwater, the Otis Booth Leadership Chair of the Division of Engineering and Applied Science, Howard Hughes Professor of Applied Physics and Materials Science, and director of the Liquid Sunlight Alliance (LiSA). The paper has been published in the October 22 issue of Science in 2021 (doi: 10.1126/science.abj7053).

The team discovered a polarizing material that combines dynamic switchability with a small size: black phosphorus. This is a variant of phosphorus with a special atomic configuration. The phosphorus atoms are arranged in the element’s crystal lattice in such a way that they form corrugated layers. “It is these tiny structures that cause the polarization,” explains team leader Harry Atwater from Caltech.

When light hits the ribs of the black phosphor, it is reflected or absorbed to different degrees depending on its angle of incidence and polarization. “If the polarization of the light is aligned along the ribs, for example, the material reacts differently than if the polarization is perpendicular to them,” says Atwater. In tests, a layer of black phosphorus only three atomic layers thick worked like an effective polarizing filter.

Because black phosphorus is a semiconductor, its behavior can be influenced and changed by electrical signals. In the experiment, the research team was able to specifically control the polarization of light – and this over a broad spectral range that extends into the infrared. “This makes the three-layer black phosphor particularly interesting for polarization conversion in telecommunications frequencies,” explain the scientists. This could help to further increase the bandwidth of optical data transmissions.

Another advantage is that the black phosphor can be controlled much faster and more precisely than LCD crystals. According to Biswas and his colleagues, the dynamic phosphor-based nano-polarizer reacts around a million times faster. Because of its small size, it could also be used in highly miniaturized optical devices.

“Our results represent a way of actively controlling optical polarization on the nanoscale,” the researchers state. In addition to telecommunications, they see possible applications for black phosphorus in selective photosensors and large-area thin-film polarization filters or displays based on polarization.